Hi. I moved this article to my new website. Please read its updated and improved version there. Thank you.

I am delighted to announce Zagata’s Tutorial on Being Abroad and Emigration from Antigonus and Valens.

The tutorial is based on an ancient text from the 2nd century CE. It is priceless in its significance because while Jyotish/Indian Astrology contains such texts and methods, it is the only one in the Western astrological tradition which thoroughly deals with the subject not so much of foreign travel/travelling abroad, but of living abroad, working abroad, studying abroad, settling abroad, etc.

However, even though the text is freely available (The Anthology of Vettius Valens Book II chapters 29-30, translated by Mark Riley), there are three major problems which have been preventing its usage:

1) It is written in a very ambiguous way;

2) Save for a crude description of the technique used, none of the concepts are defined;

3) A vital piece of information is not given. Without it, it is almost impossible to apply the method even if one understood what the text says.

Take a look at the representation of my tutorial:

The pictures for the computer design were taken from: 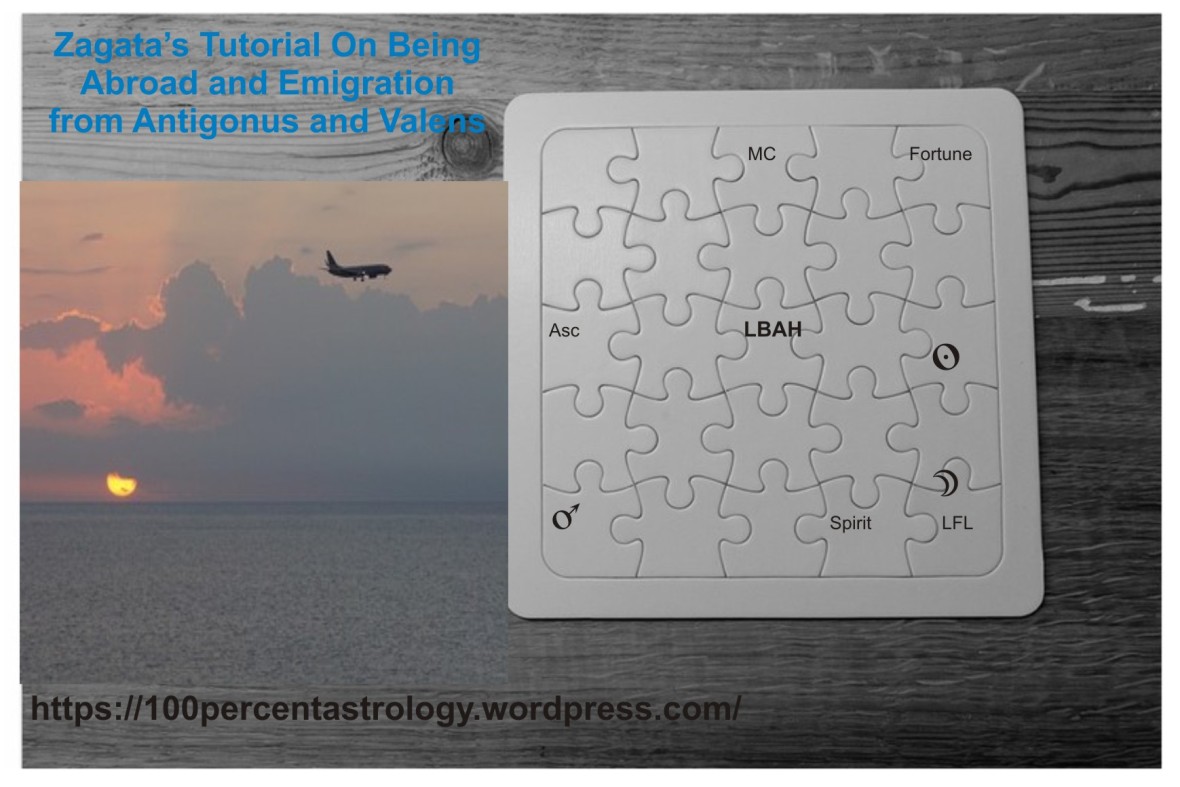 It is a puzzle which took me a few years to put all the pieces together. I was ultimately able to understand what the text says and able to clear the vast majority of the ambiguities. As you also see, the vital missing piece of information, the Lot of Being Away from Home (LBAH) is in the centre of the puzzle. This is because I discovered the formula for that Lot, which I say was deliberately not given in the text. I am the first who has been able to do that.

In order to have a better sense of what it took me to get to the bottom of this text and technique, I need to tell you a story that is very significant to me.

Briefly, the first time that I saw and touched the books by Valens translated by Robert Schmidt, which happened 6 years ago on the day of my birthday, I was given a certain astrological book as a present, which was written by a pioneering Russian author who lived in Bulgaria.

5 years later, within 1-2 days of me coming across some unique information about a method by Valens, through synchronicity, I found out that this same Russian author had published another book, though under a pen name. I bought that book and after I read it I decided to search for other books by that author.

Moving forward to March 2017, while I was working on this tutorial as well as writing Zagata’s 24 Hour Astrology Rectification Course and using parts of Valens, I came across another book by this Russian author, Fiodor Gruzinev:

It is called Astrology the Starry Science of the Arabs. Now, the largest part of the text in this tutorial is located in the book written by Valens. Since “Hermippus” was mentioned in the chapter title, it was thought that Hermippus was actually the astrological author Valens quoted. However, as James Holden explains, no such person existed around that time period. Reading Gruzinev’s book, on page 104, it says (translation by me):

“But three hundred years later Antigonus of Nicea, in commentary on the nativity of emperor Hadrian, as well as in the treatise “Hermippos”……

Incidentally, this book was written by Gruzinev in 1965. It was published in 2008 in Bulgarian. I am the first one to connect the dots and figure out that the actual author of the text on being abroad and emigration is namely Antigonus of Nicea. I was able to do this because of my perseverance and obsession with figuring out the ancient text.

Notice again how whenever something is up with Valens, the Russian author and practitioner Gruzinev appears, and I discover some ancient pieces of knowledge or information.

The material by Antigonus is just over pages 3 long. That Zagata’s Tutorial on Being Abroad and Emigration from Antigonus and Valens devotes over 20 pages of interpretation on it, as well as provides a glossary of another 10 pages, should be telling you something about the level of complexity, ambiguity and the amount of work it took to make this text understandable and usable by a modern public.

I knew what I was getting myself into, as we are talking about Valens after all – the most cryptic surviving astrological author – but the task of understanding the text and finding which Lot LBAH stands for proved more difficult that even I myself expected. The fact that the material does not contain an example chart made understanding it more difficult. Over these few years, due to little or no progress, I had to give up twice. Even when I discovered, after months of research, which Lot LBAH actually is, I had to take some time off because there were still some major ambiguities in the text.

Just as Valens had to learn through personal experience that whenever the planets ruling the times are unfavorable for whatever major pursuits, breakthroughs or discoveries one is working on, and the native has to wait until the proper planets start ruling the times, if they are are to have chance of succeeding, so did I. Just as Valens spent some years looking for an astrological teacher and technique and had to give up and take some time off, so did I. Yet when the times turned around, he found that teacher and technique, just as I had major insights and my understanding of the method improved significantly.

In addition to this text, the tutorial uses a quote from Valens from another chapter in Book II, and a few sentences from Claudius Ptolemy’s brief and cryptic treatment (also 2nd century CE) on the same topic.

The major predictive technique used for determining when the native will be abroad is very unusual and not many astrological programs have it. I have used the excellent Delphic Oracle software. If you don’t have it, the free Valens software will calculate the technique as well as the Lots for you, though I have provided all the necessary calculations.

I not only disclose the missing formula for the Lot of Being Away from Home in the tutorial, but I then I exemplify how to use the method on 50 natal charts that are conducive to being away from home.

Some of the charts are taken from Astrodatabank, while others are from people I know. There are lots of intriguing cases. I will give a few: a native who has an older twin, and while both live abroad, they did not emigrate at the same time or to the same country. Another native who has a twin, and they both, along with their mom and older sister, emigrated abroad at the same time. They settled permanently abroad.

Each nativity is examined twice: first at the natal level – to figure out whether the native has indications for being abroad, and then on the dynamic/timing level – to say when this native went abroad (or not) and why. The explanations are quotes from the original text, whose meaning has already been explained, and I guarantee that, by the end of the tutorial, they will be thoroughly learned.

Those interested in the material offered by me will be exposed to the most ancient (horoscopic) way of delineating a given topic, namely being abroad and emigration. It is nothing like the modern one. Your astrological horizons will be greatly broadened, and you will come to appreciate that there is more than one way of doing things. What is more, no one has to give up their methods of delineating topics. This material works independently of that. It examines the chart configuration from a completely different angle. It also uses the ancient chart format that is very easy on the eyes and focuses on what matters most, namely recognizing the various configurations.

While taking 2 years off from this cryptic text, I decided to learn the method of being abroad and emigration taught in Jyotish. It turned out that the Indians use largely the same “houses” as this ancient method, but the similarities end right here. As I was applying the method within the framework of Western Ancient Astrology, I threw away the purely Indian contributions and was left with information that is concrete, useful and works.

The problem, however, is that there are too many variations. In other words, the planets connected with being abroad and emigration have many other roles they play in a given nativity. Thus when these planets get activated with a predictive technique, being abroad or emigration is only one of the things they may signify.

On the other hand, the method given by Antigonus and Valens is intended precisely for being abroad and emigration. As such, it is more coherent/focused. Again, it is nothing like the modern or even Indian methods of delineating a topic.

Please note: I am not saying it is better and that these methods should be discarded. Far from it; they should be used. What I am saying is that because of these advantages, Zagata’s Tutorial on Being Abroad and Emigration from Antigonus and Valens will be an invaluable addition not just to modern or traditional practitioners, but those of Jyotish as well. While I use the tropical Zodiac, that is my preference. The method is so rich and encompassing that who is to say it won’t work in a sidereal measurement. I have not tested it sidereally though, so am in no position to comment on this.

Now that the hard work has been done, the text understood and interpreted, and the missing formula for the key Lot discovered, this information is available to the astrological community in a usable format for the first time in over 1,800 years.

I want to emphasize that the method presented is not some relic. I did not devote so much time for historical or theoretical research sake. I am an astrological practitioner, not a historian or translator. Having said that, I have compared all 4 modern translations of this text (3 English and 1 German) and have scrutinized them to make sure I have what I consider to be the most consistent one.

Zagata’s Tutorial on Being Abroad and Emigration from Antigonus and Valens offers unique and powerful astrological knowledge which, once the text is understood, can be immediately applied to get practical and concrete results. All the example charts used are from people living in the last 150 years, with the majority of them going abroad in the middle or late 20th century, as well as during the 21st century.

With over 200 pages of text and 370 pages in total, Zagata’s Tutorial on Being Abroad and Emigration from Antigonus and Valens is extremely comprehensive and requires a serious commitment. In addition, it contains diverse chart configurations, both on the natal and timing level, which help one expand their focus and gradually learn to detect them. The tutorial, as with anything worth learning, will take time to master, but once this is done one can make use of the method for their whole life.

The tutorial is in English and in written PDF format. The cost is 360 Euros. Payment is done by bank wire.

As with my Rectification Course, the same caveat applies: I will require your written word that you will keep this material to yourself and for your clients only. You will do the same with the missing formula of the Lot which I have provided.

Those that have a question or comment are welcome to leave them below or contact me by email.